Under normal circumstances, the phrase “I don’t feel good” is not immediate cause for alarm. But as Howard Brown said these exact words to his wife, Lisa, cases of COVID-19 were on the rise in Bucks County. In the days and weeks that followed, Howard tested positive and battled this unpredictable new disease. While his life hung in the balance, Lisa and her family placed their faith, hope, and trust in the teams at Doylestown Hospital to save his life.

All things considered, life was normal in mid-March of this year. Howard and Lisa Brown were looking forward to their youngest son’s upcoming high school graduation in June, the return of his brother from college, and an array of other typical family activities. National news of the novel coronavirus and the disease it caused, COVID-19, was concerning, but not yet prevalent enough in Bucks County to cause significant worry. Howard, an attorney, kept up with the busy pace at his solo law practice and Lisa continued to engage with patients and colleagues through her job as a patient transport coordinator for Doylestown Hospital.

The Moment Life Changed
Normal life came to a halt on March 31 when Howard said to Lisa, “I don’t feel good.” Given Lisa’s position at Doylestown Hospital, and with her father’s input as a family practice physician, Howard was quickly isolated at home. When he tested positive for COVID-19 just a few days later, his fever and other symptoms were still manageable. Eight days from the onset of symptoms, the Brown family’s physician, Robert Grabowski, MD, was concerned that Howard’s condition was not improving and recommended he go to the hospital immediately. On April 7, Lisa watched Howard leave the driveway and make the short drive to the Doylestown Hospital Emergency Department alone.

Uncertain Times
As Howard arrived at Doylestown Hospital, Bucks County was rapidly nearing a total of 1,000 cases of COVID-19. Doylestown Health had been on alert since January, and had already taken a lead in several statewide COVID-19 response groups. With the recent opening of the Woodall Center for Heart and Vascular Care, Doylestown Hospital’s capacity to accept patients from the predicted surge of novel coronavirus cases had increased. Preoccupied with worry and the knowledge that she and her son Josh had also tested positive for COVID-19 (although they were mostly asymptomatic), Lisa waited anxiously for news of Howard. The first phone call from Doylestown Hospital was from Matt, a nurse in the Emergency Department, who explained the admissions process. “He told us to seal off Howard’s at-home isolation room for three days, and then ‘Lysol the hell out of it,’” Lisa remembers.

Life in the Balance
The quick progression of the disease and Howard’s rapid decline necessitated a transfer from the COVID unit to the COVID ICU within a matter of days. “Horrifying is the best way to describe it,” says Lisa when recalling the severity of her fifty-one-year-old husband’s condition. “Why him?” she remembers wondering at the time.

Les A. Szekely, MD, FCCP, DABSM, Director, Clark Center for Critical Care Medicine, along with his colleagues, also questioned why Howard, an otherwise healthy person, was in multiple organ failure and declining so quickly. “Our critical care teams experimented with every method we researched and thought might work,” he recalls. Working 14-hour days, they raced to find new treatments that could halt and reverse the progression of the disease. In Howard’s case, “we initially used the prone positioning and a cocktail of medicines and vitamins, and when he did not show improvements, we quickly resorted to two doses of convalescent plasma,” said Dr. Szekely. “When Howard continued to deteriorate, we administered an experimental medication yet unproven, currently investigational, and reserved only for the treatment of the most serious COVID-19 cases with threatening respiratory failure.”

Even with these innovative approaches, on Friday, April 10, nurses in the COVID ICU called Lisa to facilitate one last video visit before Howard was placed on a ventilator. “My sons had a hard time even staying in the room. It was difficult to see him like that,” Lisa recalls.

Over the next 24 days, the ICU teams drew upon every resource possible in a race to save Howard’s life. “It was heart-wrenching and emotional for our ICU team to care for him when he was so very sick on a ventilator, being turned onto his stomach every day by the proning team, often anxious and struggling to breathe,” said Terri Long, MSN, RN, CCRN, NE-BC, Director, Critical Care and Cardiology Services. “Howard received the best evidence-based treatment, including medications and therapies to help him win the battle against COVID-19,” she added. Dr. Szekely, who oversaw Howard’s treatment in the ICU at Doylestown Hospital says, “We have an incredible multi-disciplinary team which meets every day to develop a game plan for each individual patient. This team includes intensivists, nurses, respiratory therapists, nutritionists, and an ICU pharmacist, among others.” According to Siddavatam Naveen Reddy, MD, a hospitalist with the ICU team, “Howard was pulled back from the clutches of death by this awesome team at Doylestown Hospital.”

Every day was a step forward, but the exciting possibility of Howard’s recovery was tempered by the reality of the surprising and severe turns COVID-19 could take. “I try to prepare families for the rollercoaster ride that this illness can take you on—two steps forward, one step back. Howard really hung in there,” says Dr. Szekely.

Once it was determined that his body cleared the virus—a huge step—Howard was transferred to the “clean” ICU where speech, physical, occupational, and respiratory therapies could begin in earnest along with dialysis. Lisa was cleared to return to work in patient transport at Doylestown Hospital the day before Howard’s transfer to inpatient rehabilitation. She herself was permitted to transport Howard from his hospital room to Moss Rehabilitation, a comprehensive inpatient facility affiliated with Doylestown Health and located onsite. “We could focus on moving forward and getting him ready to come home,” she recalls. “It was a huge relief!”

Now at Moss Rehab, Howard was weak but making progress each day. Sandy Horgan, RN, Howard’s nurse remembers: “The first day I met Howard, he was very anxious. When one struggles to breathe for as long as he did, anxiety is a perfectly normal feeling.” Visits from Lisa and his sons, Josh and Evan, lifted his spirits as they stood outside the solarium window in full view while Sandy observed. “Howard waved while talking to them on the phone,” she says. “I could see and hear the profound emotions shared through that window—warmth, hope, and longing.”

Enduring Gratitude
With Howard’s outlook improving and his return home on the horizon, Lisa found time to write a heartfelt letter of gratitude addressed to “the amazing staff at Doylestown Hospital.” Lisa thanked the critical care teams—physicians, ICU nurses, technicians, therapists, chaplains—and many others involved in Howard’s care. “They will forever be a part of our story,” she says. “I know that every single person who has been a part of his journey is invested in him and rooting for him.”

At one point early on in Howard’s illness, Lisa was asked if she wanted to transfer him to a bigger hospital. “I have never been prouder of where I work,” she wrote. “The care that my husband received rivals any of the Philadelphia teaching hospitals. The doctors and nurses were outstanding in their communication with me, especially difficult since I couldn’t physically be with my husband. I challenge you to find better care.”

Lisa made a gift to Doylestown Health Foundation along with her letter. “In Judaism, the number 18 holds a special meaning,” she wrote. “It means chai, or life. Therefore, please find my gift as a multiple of 18, for saving my husband’s life.”

Deeply touched by the exceptional care Howard had received, Lisa’s parents, Carol and Horace Barsh, MD, made a gift while Howard was in the COVID ICU. Jane Brown, Howard’s mother, also gave a gift to Moss Rehabilitation. Ellyn Halper, Howard’s sister, answered the call for an urgent need and made an in kind contribution of hundreds of N95 masks to Doylestown Health.

“We are honored that members of Howard’s family stepped forward in support of Doylestown Hospital in the midst of all that was going on with Howard’s care and recovery. That they took the time to recognize our caregivers and offer their generous support is truly meaningful to all of us,” says Laura Wortman, Vice President and Chief Development Officer.

A Triumphant Sendoff
On May 28, the Doylestown Hospital lobby was the backdrop for a truly memorable celebration. Although their faces were masked, the eyes of those present glistened with tears of joy and pride as they gathered to witness a moment months in the making. After seven weeks at Doylestown Hospital, Howard was discharged with great fanfare into the arms of his family and friends. “Watching Howard reunite with his family, no longer separated by windows, was remarkable,” says Sandy Horgan, who, along with her colleagues, will always remember the happy tears shed that day.

Unexpected Silver Linings
Now a grateful patient, Howard continues his progress with outpatient rehab and pauses at times to consider all that’s transpired. “I wouldn’t wish this experience on anyone,” Howard shares, “and I certainly don’t recommend it as a weight loss plan!” With time to reflect, Howard is navigating the complex feelings of lost time and profound gratitude for the gift of life. “I got to hit the reset button,” he says. “Things were good before, but this experience has given me new perspective and it’s made me a better father, husband, son, brother, and friend.”

Howard is profoundly grateful to be able to convey his own thanks to the clinical teams that came together to save his life. 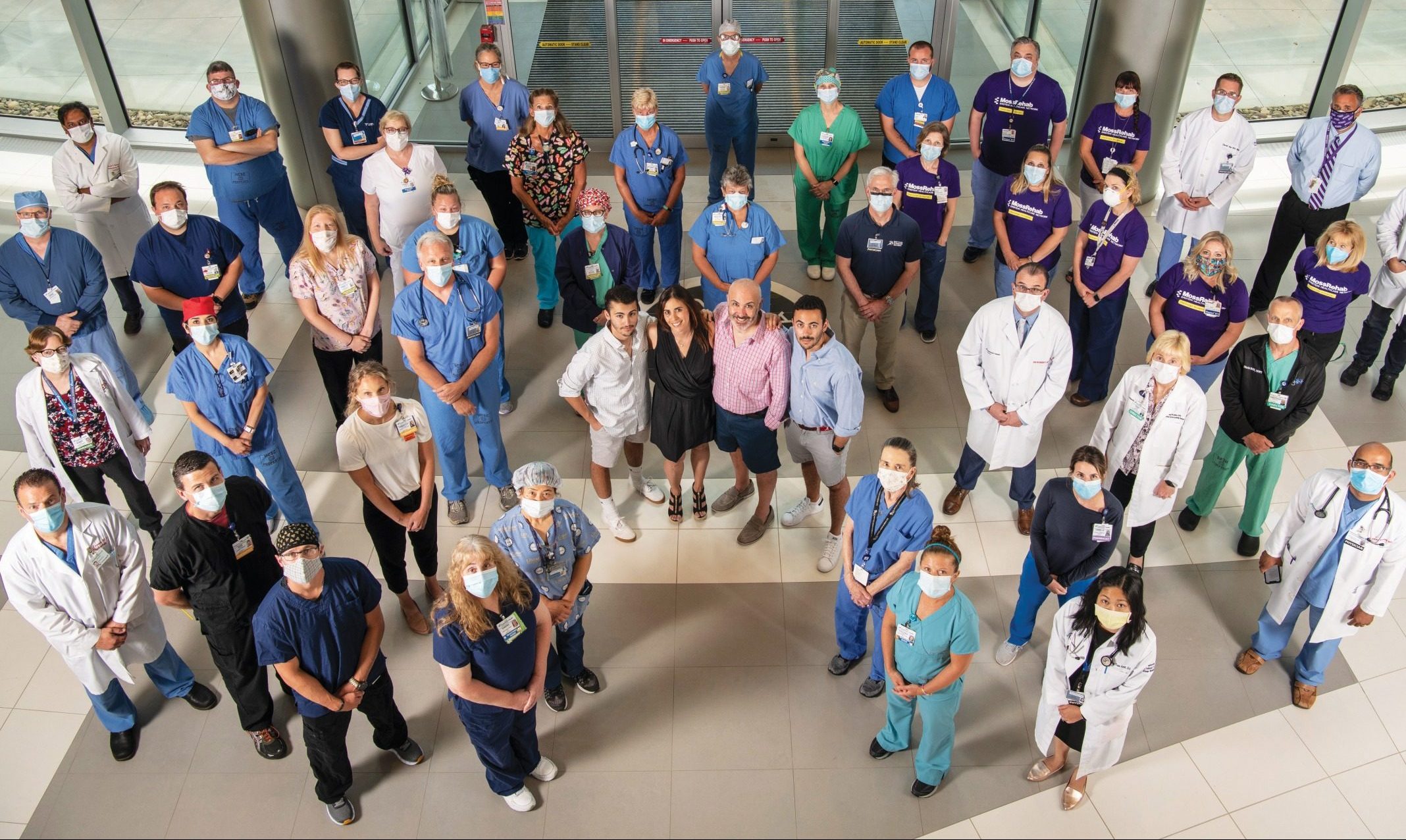 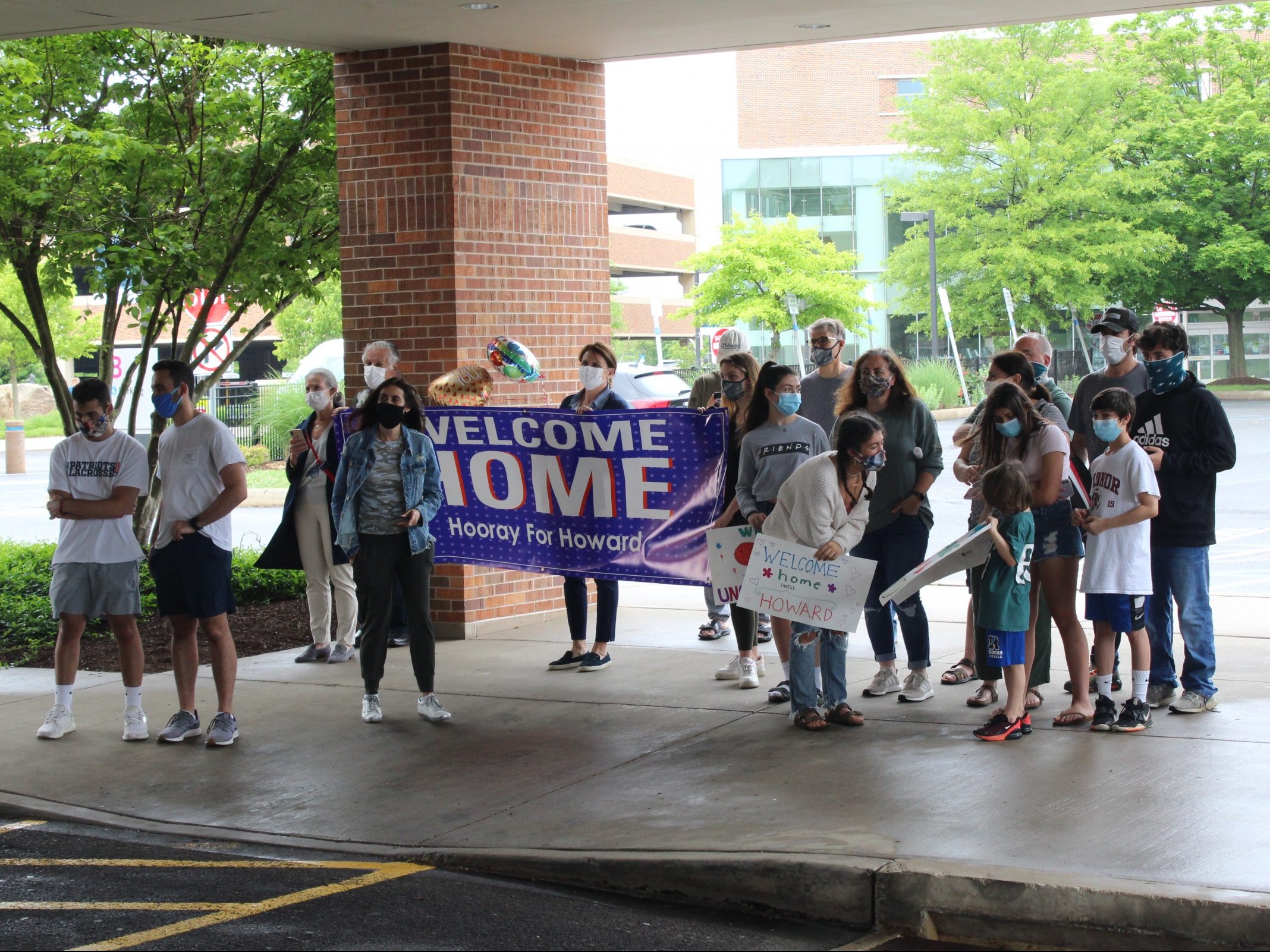 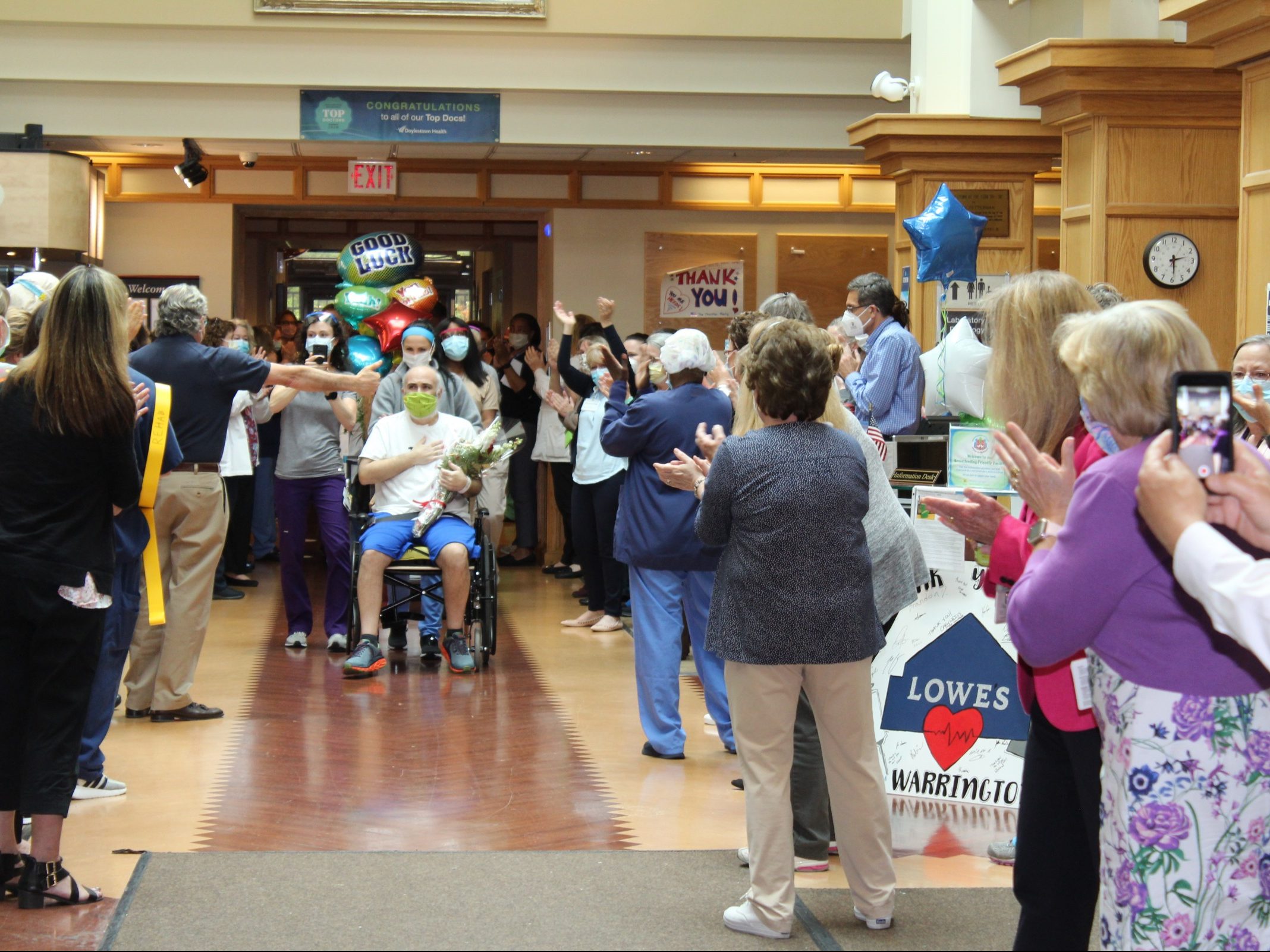 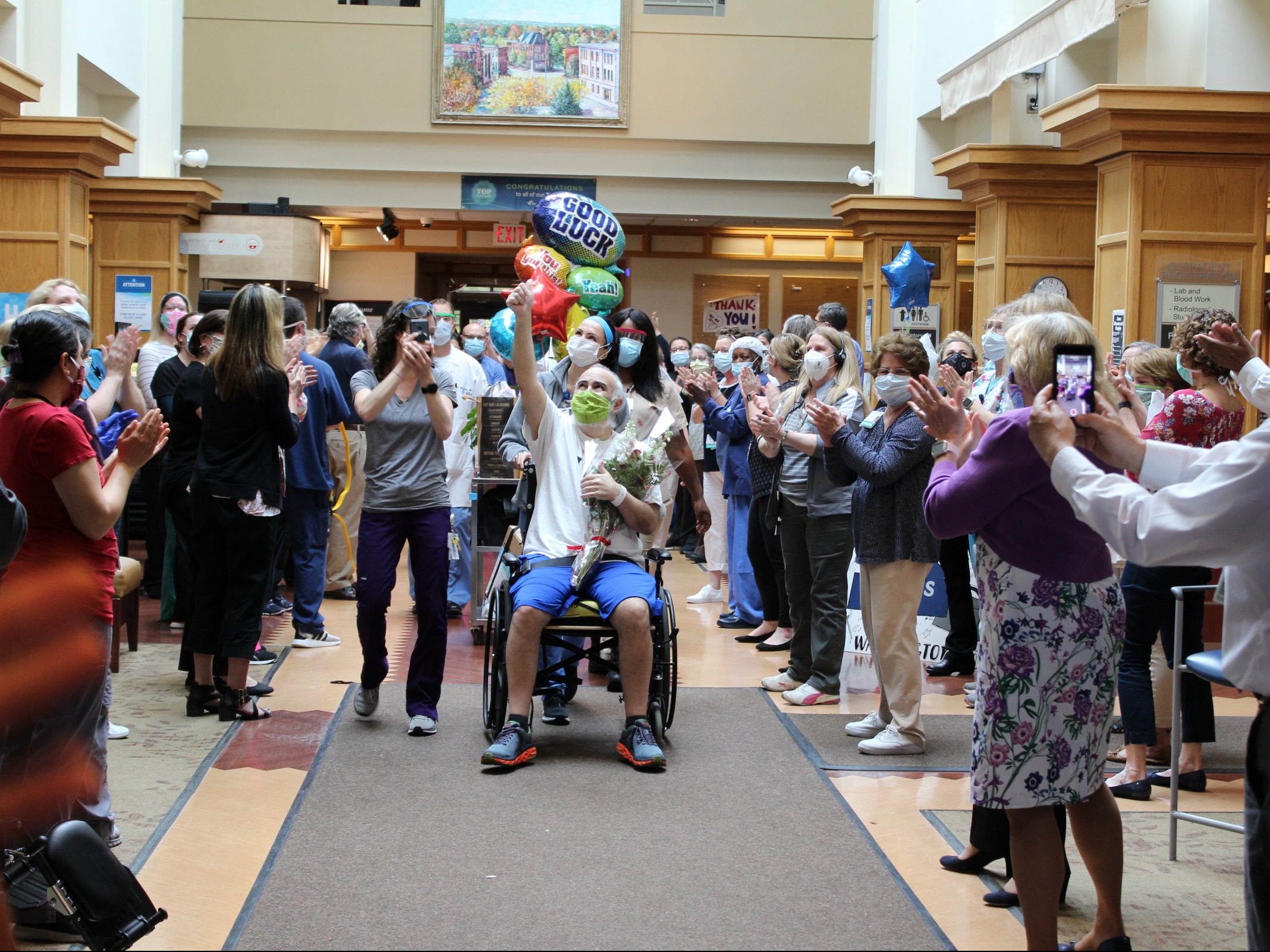 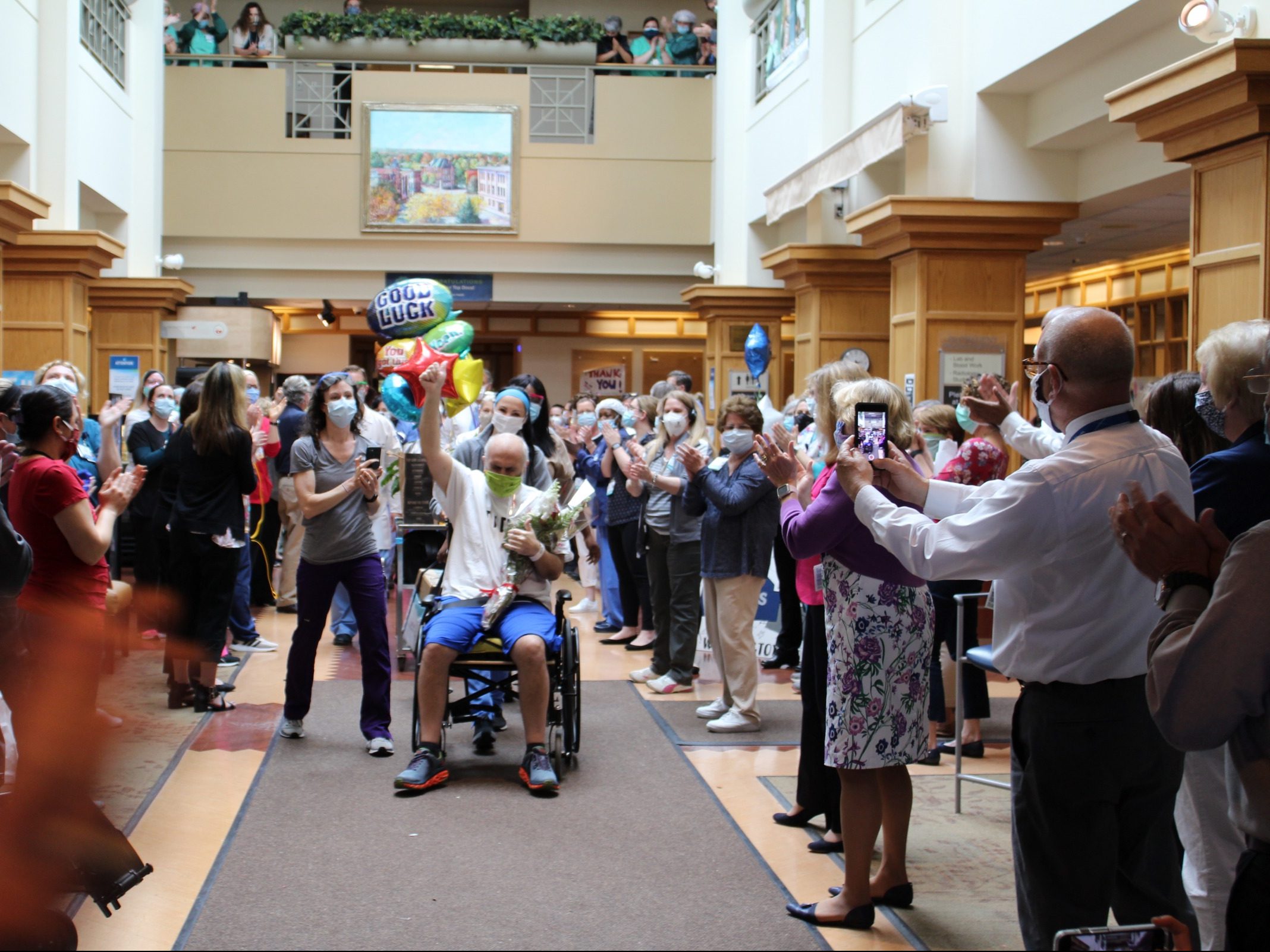 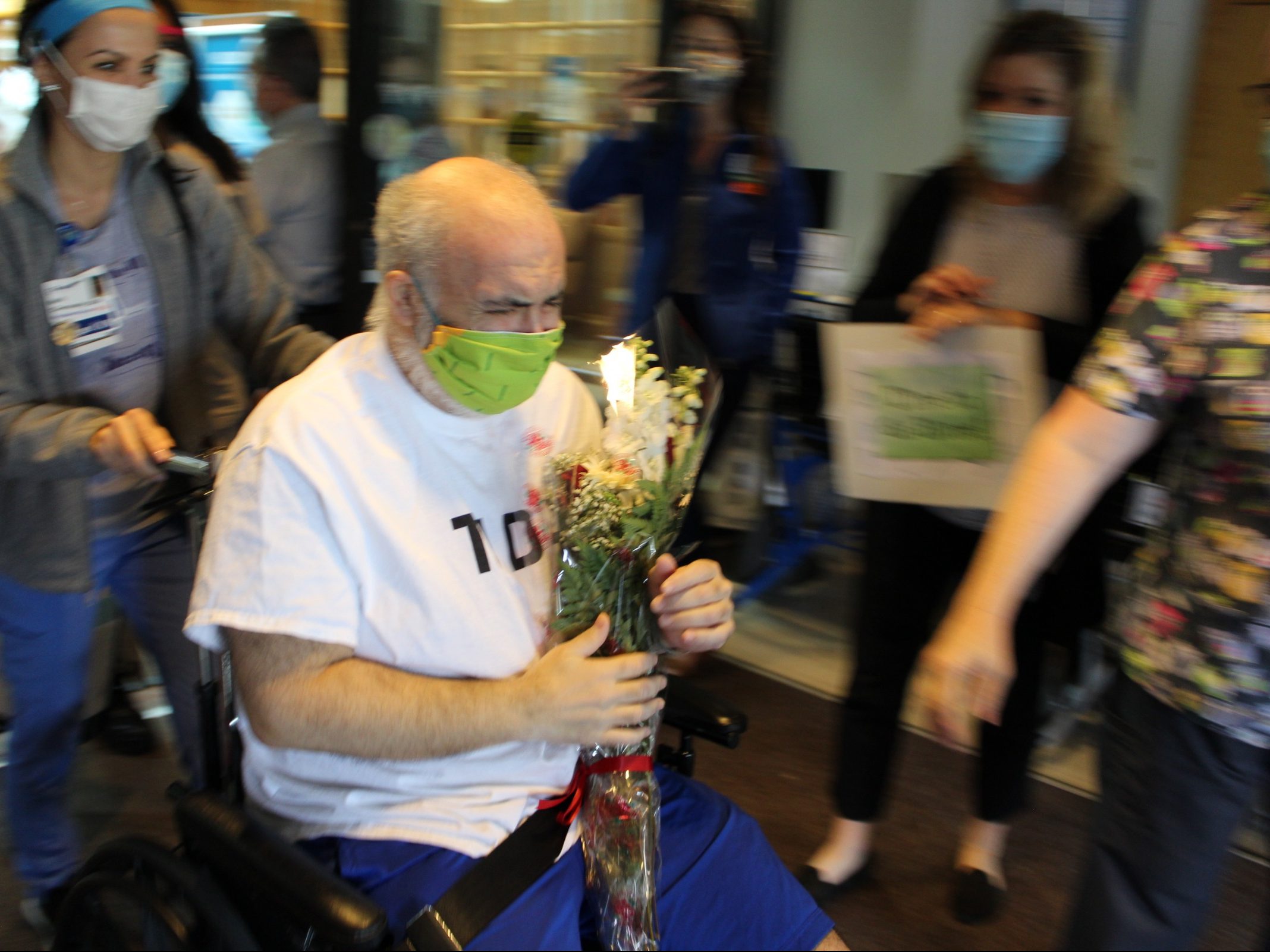 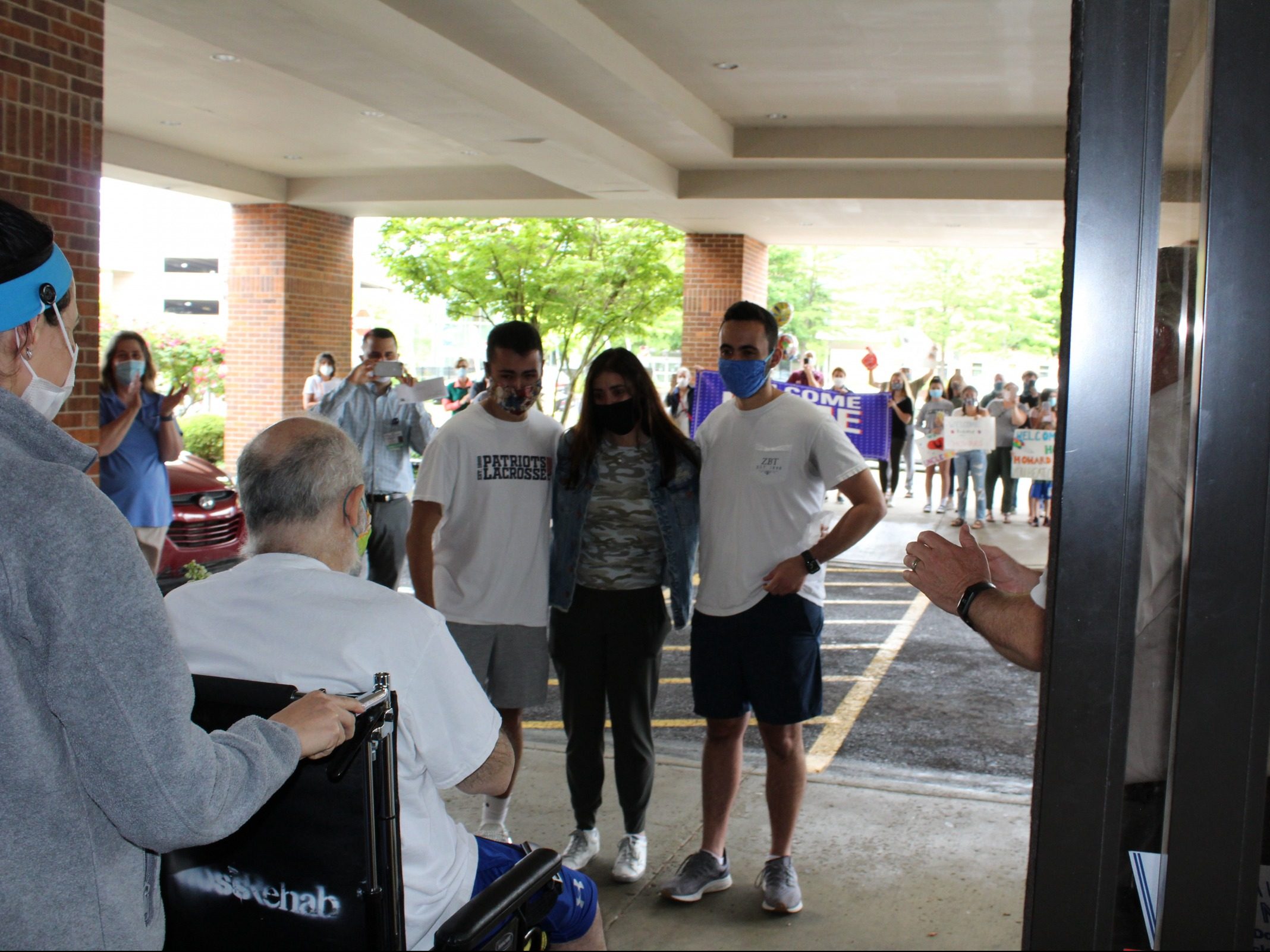 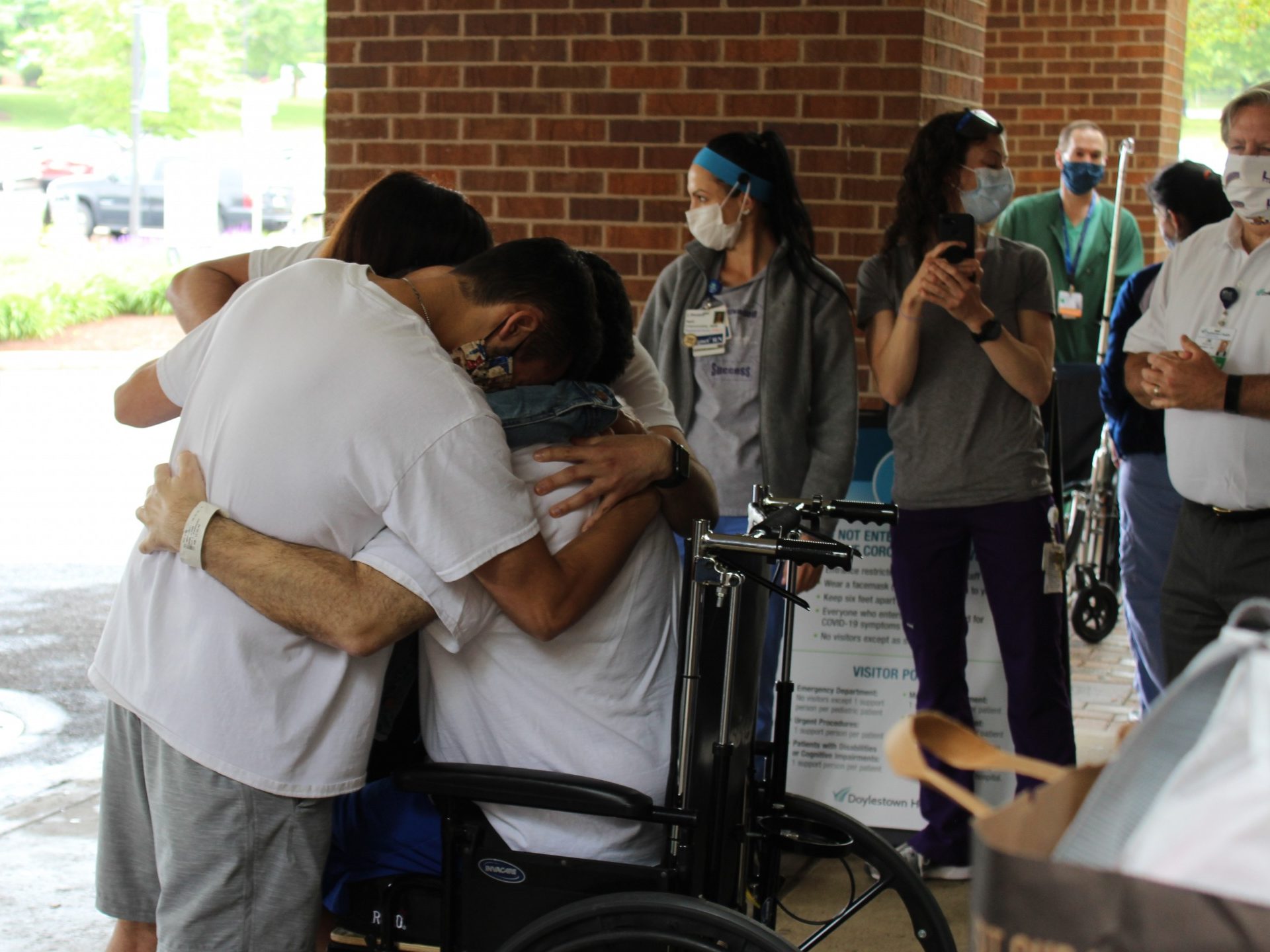 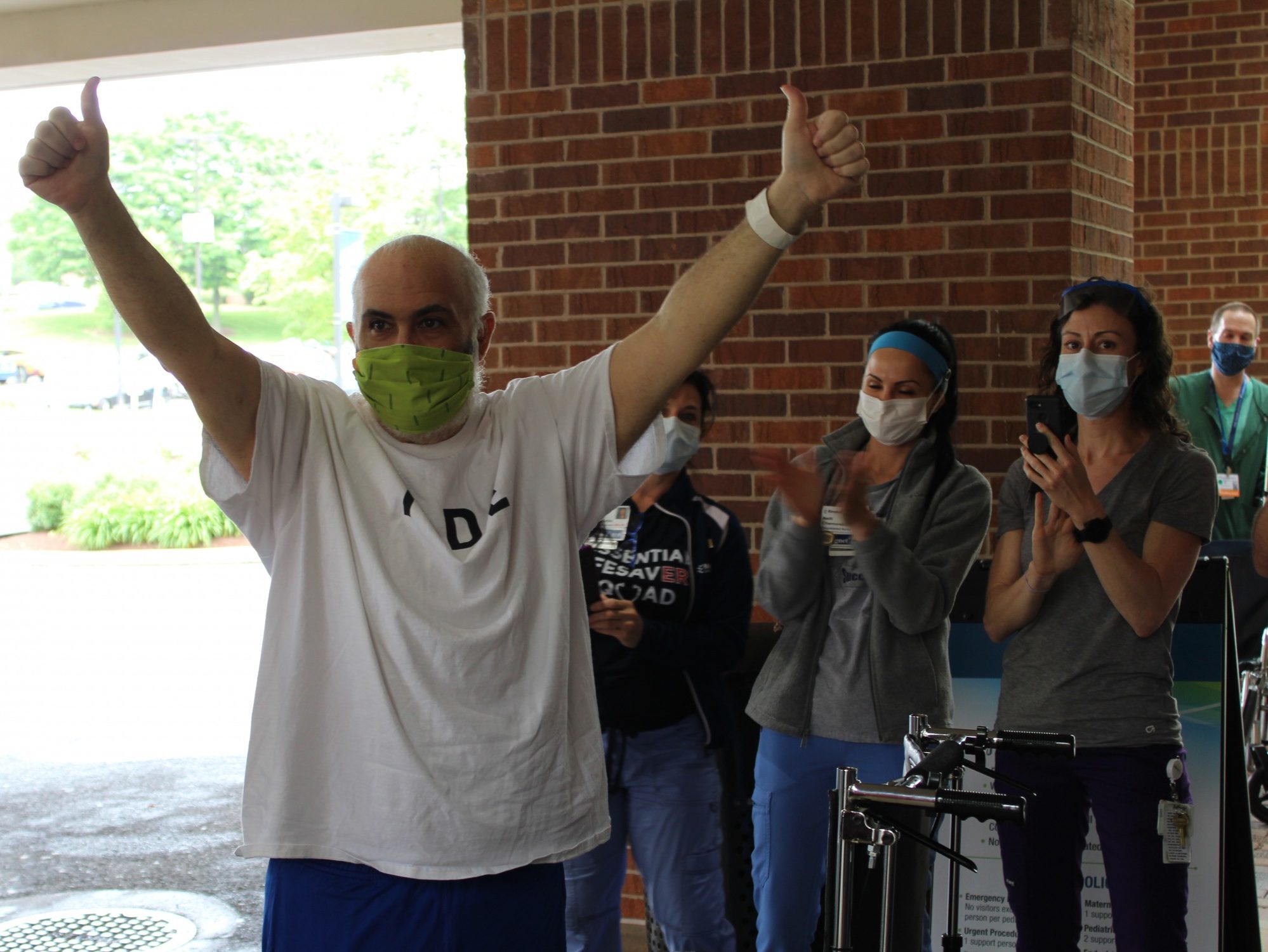 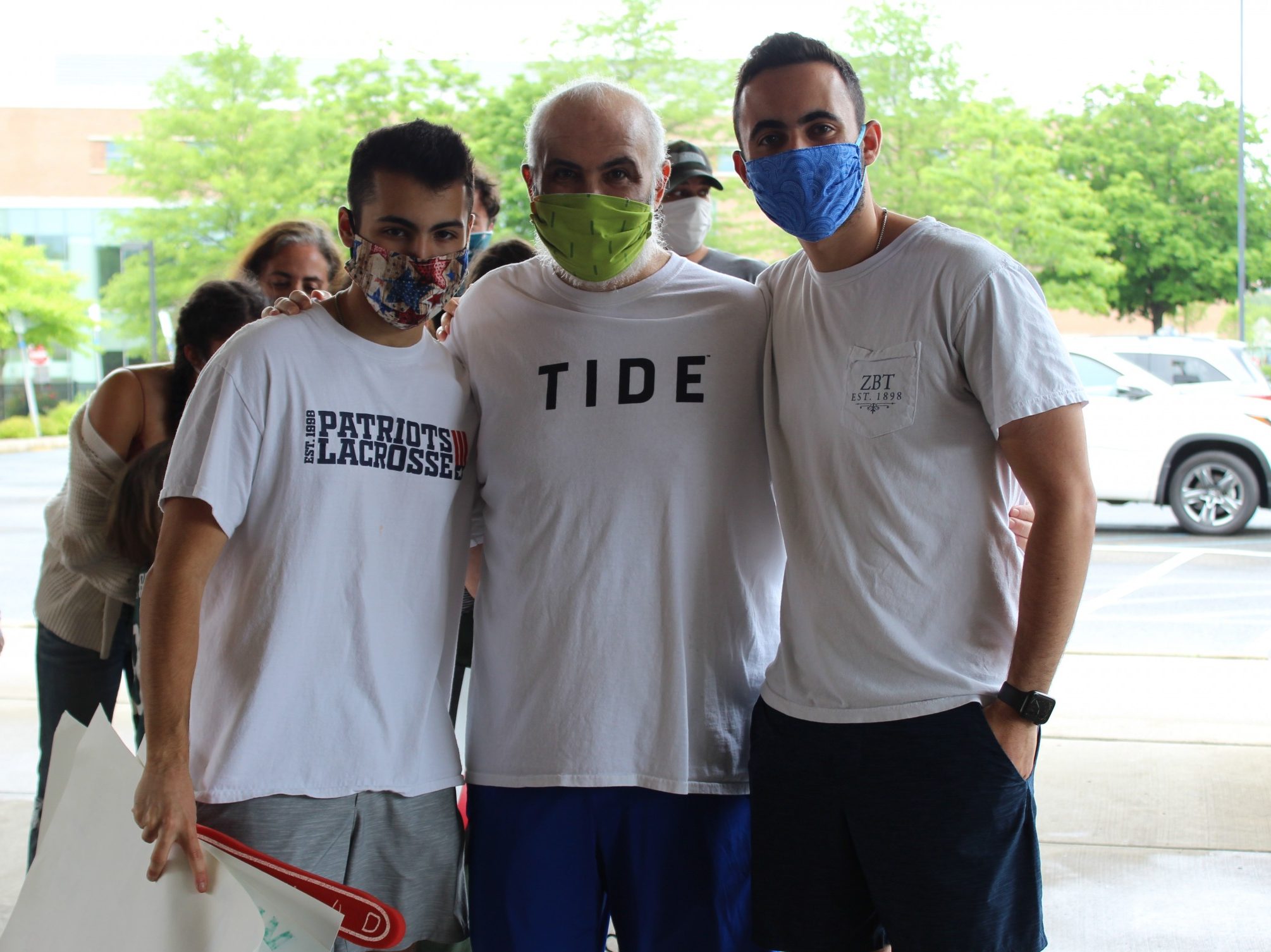 Article appears in the 2020 Philanthropy Report

About the Clark Center for Critical Care Medicine

On the third floor of the Cardiovascular and Critical Care Pavilion, the Clark Center for Critical Care Medicine will offer 32 universal Intensive and Intermediate Care Unit beds and on-site respiratory therapy. With the expanded space, Doylestown Health can grow our already successful Intensivist Program, in which board-certified physicians are available around the clock, and coordinate custom care plans for every patient with our interdisciplinary team.