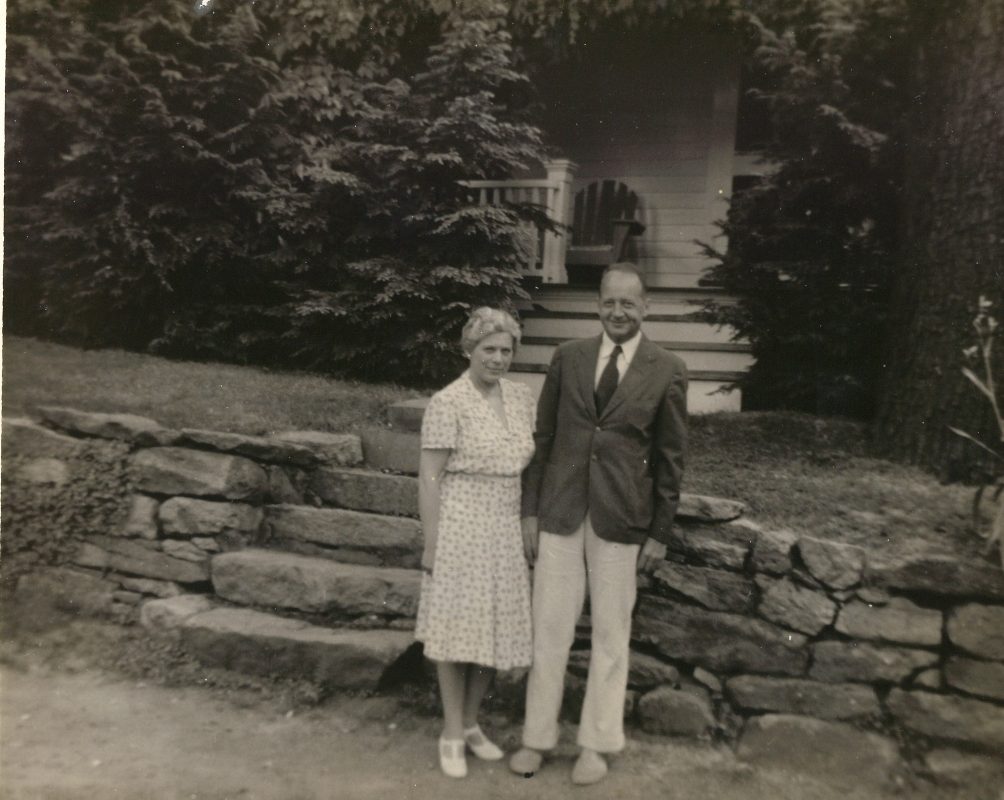 Anna and Edward Fell in front of their home. Photo courtesy of Susanne Adams.

A Legacy in Trust

In 1969, Anna and Edward Fell designated a portion of their estate to be placed into trusts following their lifetimes. These funds were set aside to support what they cared about most in life – their children and grandchildren, as well as the future success and sustainability of Doylestown Hospital. At the time, the Village Improvement Association (VIA)—which had established the first hospital in Doylestown in 1923—was beginning to raise funds for a new building on West State Street. The second hospital, constructed in 1935 and expanded in the 1950s and 60s, was already too small, and plans were being made to move into a new and larger facility.

With the fulfillment of the Anna and Edward Fell Trusts nearly fifty years later, the significant proceeds from their visionary bequest will become the seed gifts establishing the Doylestown Health Legacy Endowment Fund, supporting the priority needs of a nationally recognized hospital that is still growing to meet the needs of the community. Anna and Edward’s gifts showed their remarkable foresight and vision of the hospital’s potential, and today can be used to benefit the community and the hospital exactly as they had wished.

The Family on the Hill

Anna Rockafellow Fell and Edward W. Fell were from old Bucks County Quaker families. Edward’s father, David Newlin Fell, was a judge in Philadelphia, and later Chief Justice of the Supreme Court of Pennsylvania from 1910 to 1915. He served as a lieutenant in the Civil War, and raised his seven children in Philadelphia and the hilly farmland of Buckingham Township, on land that had been in the family since before the Revolution. Later in life, he built a home called “Wheelbarrow Hill” in Holicong near Doylestown, where he could summer with his family away from the heat of the city.

His great-granddaughter, Susanne Adams, spent a few childhood years in that house—a rambling Victorian “cottage” of the kind known throughout Gilded Age resort towns like Newport, Rhode Island. By that time, the house had passed to her grandfather, Edward, whose two unmarried sisters had also lived there until their deaths. Susanne recalls the house and its surroundings fondly: the vast kitchen with its walk-in pantry and cast-iron stove, the parlor and the sitting room, the flower room off the verandah, and “gardens, gardens, everywhere gardens!”

In 1971, Wheelbarrow Hill became the site of the first Bucks County Designer House and Gardens (at the time called the Bucks County Designers’ House), a fundraiser established by the VIA to support the “building fund” which was designed to help construct the new Doylestown Hospital at the site where it presently stands. To this day, the Bucks County Designer House and Gardens is still a significant fundraiser for the hospital. Susanne had the chance to see the home after the designers had finished with it. “They turned my bedroom into a kid’s jungle dream!” Susanne laughs. “There was shag carpeting and this kind of metallic brightly colored wallpaper covered in vines; it was wonderful.”

The Fells have always had close ties to their home community and Doylestown Hospital. Along with blood ties to the town’s founders (Joseph Fell’s second wife was a Doyle), Edward served on the board of trustees, and Anna was a member of the VIA, which oversaw the governance of the hospital and was responsible for raising funds that supported its operation.

Susanne worked as a candy striper in middle school and for the hospital’s visiting nurse association while she was in nursing school. Her stepfather, Edward “Ed” Doble Fell, who was Anna and Edward’s adopted son, even spent time recovering from a car accident in the original eight-bed hospital on Pine and Oakland streets. Her mother, Sarah Fell, and her mother’s brother were contributors, and Sarah Fell was treated in the first cardiovascular intensive care unit at the hospital. Susanne herself was treated here for a life-threatening virus in college. “This place saved my life,” she says. Early in 2020—thanks to thousands of gifts made through the One Vision Campaign—Doylestown Health will open the Cardiovascular and Critical Care Pavilion, which represents a new era in heart and vascular care at the hospital.

In keeping with their Quaker roots, the Fells were strong proponents of helping people. “Many people who make planned gifts have an idea for how they want their investment to impact the health system,” says Garrett Owen, Director of Development for Doylestown Health Foundation. “For Anna and Edward Fell, it was evident through their estate documents and by talking with their family that they wanted their gift to support the ongoing work of the hospital through an endowment.”

Their wishes will be honored by directing the significant proceeds generated from their trusts to the Legacy Endowment Fund, which supports the priority needs of the hospital in perpetuity. With the Endowment Fund, Doylestown Health can continue to invest in new technologies, cutting-edge programs and treatment options, and in recruiting top talent in healthcare. By making Doylestown Health a beneficiary of their trusts, the Fells ensured a future for healthcare excellence in the community they loved and served all their lives. “I know this is what they would have wanted,” says Susanne.

A Gift for the Future

Planned gifts are a powerful vehicle for change. By establishing an endowment or a trust, designating Doylestown Health as a beneficiary of your estate or life insurance, and through a variety of other options (many of which receive tax advantages and benefit you during your lifetime), you can be part of ensuring that Doylestown Health is here to serve the needs of generations to come with world-class healthcare.

To learn more about planned giving opportunities, or to notify us that you have already included Doylestown Health in your estate plans, please contact Garrett Owen, Director of Development, at 215.345.2802 or gowen@dh.org.