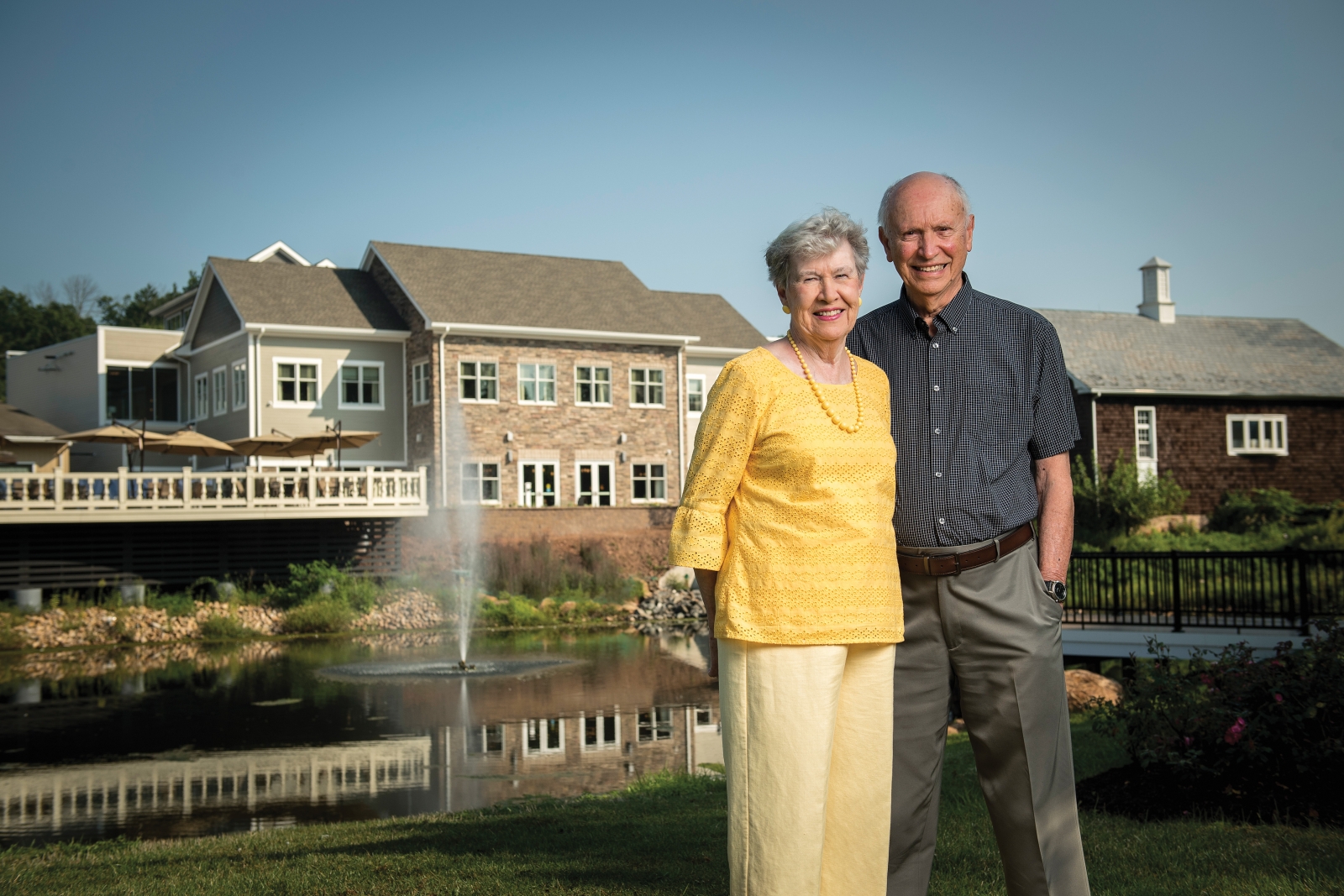 Sharing their time and talent with others has kept Norm and Jean Leister active during their 63-year marriage. Now, as residents of Doylestown Health’s Pine Run Retirement Community, their boundless spirit of generosity and volunteerism takes shape with a philanthropic gift to support campus expansion through the One Vision campaign.

As first-graders in Pittsburgh, Pennsylvania, Jean and Norm Leister met for the very first time. It wasn’t until years later, as recent college graduates that they met again by chance at a weekly dance held in Jean’s suburb of Brentwood. “We reconnected and the rest is history,” recalls Norm.

From there, the Leisters began their married life and welcomed the first two of their ten children in Rochester, New York as Norm pursued graduate studies in chemistry. Norm’s position as a research chemist with the Rohm & Haas Company brought the Leisters back to New Jersey, and Jean continued to hone her leadership skills as a volunteer in countless community activities.

The Leisters settled in Doylestown in 1993 where Jean was delighted to learn “that they had an active women’s club. I was amazed at the impressive history and work of the Village Improvement Association of Doylestown (VIA) and became a member. I was so happy to get involved in something worthwhile.”

Volunteering across Doylestown Hospital, Jean’s devotion to service and community is well-known and respected. “Jean’s unwavering commitment to the Heart Institute since its inception and to our patients and the families we serve is a gift we deeply treasure,” says Jim Brexler, President and CEO of Doylestown Health. “As a volunteer, Jean has spent thousands of hours engaged in service to the hospital and in support of our mission. She and Norm embody a true spirit of giving with all they do as volunteers.”

As retirement approached, the Leisters’ knowledge of Doylestown Hospital and its connection to Pine Run Retirement Community helped validate it as the first choice for retirement living. “I had a hip replacement two years ago,” Norm shares. “The care at Doylestown Hospital was excellent, from inpatient to rehabilitation. Pine Run is linked to all of these services, so our care is well-connected,” he continued. “Also, everything Pine Run has to offer by way of activities and classes are designed to be accessible and keep us healthy as long as possible. For instance, I’m playing golf and gardening.”

Just as Jean and Norm settled into their new home at Pine Run, plans were unveiled for the new Pine Run Community Center, affectionately known as the “Hub.” According to Jean, “it has been so exciting to watch the progress from week to week and now the first section of the building is open. Everyone here will benefit tremendously from the new Hub and all of the beautiful new spaces for activities and dining.”

Extending their spirit of generosity, the Leisters chose to make a philanthropic investment through the One Vision campaign that supports the initiatives most personally meaningful. “We’ve been blessed in many ways and we are fortunate that we can give back not only through volunteering but now through our gift to support Pine Run and Friends of the Heart Institute’s commitment to the Woodall Center for Heart and Vascular Care,” notes Jean.

“With the Leisters’ generous gift we will be able to help ensure the future vitality of Pine Run,” says Maria Santangelo, Executive Director of Pine Run Retirement Community. Echoing appreciation for the Leisters’ generosity, “their support of two of our campaign priorities brings us closer to making this tremendous comprehensive vision a reality,” says Laura Wortman, Vice President and Chief Development Officer.

According to Norm, “at the end of the day we are all part of this community and we are in this together. It’s not ‘they,’ it’s ‘we’. We are glad to give back. And that is truly something worthwhile.”

Pine Run Retirement Community in Doylestown has 272 cottages and 24 apartments situated on a beautiful 43-acre campus. Also located on the campus are the Pine Run Health Center, which offers rehabilitation services and 90 skilled nursing beds. The Garden, a 40-bed, secure dementia neighborhood, is located on the top floor of the five-story Health Center. The Willows neighborhood offers an intimate setting for end-of-life care, including palliative, comfort and hospice services. An additional 107-bed personal care residence, Pine Run Lakeview, is located on Lower State Road in Doylestown.